What Is Equity Division In An Illinois Divorce? 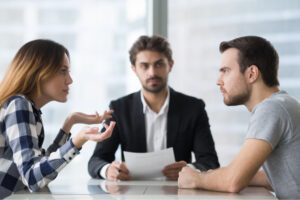 Illinois is an equitable division state. Rather than getting a 50/50 split, marital property is divided equitably in a divorce between spouses, or as fairly as possible. The court makes the decision and includes a long list of factors, including the marriage length and earnings of both spouses.

While it may seem unfair to the spouse who is given less, courts are hell-bent on ensuring that marital property is divided as fairly as possible during an Illinois divorce case. This typically results in unequal distribution of assets. Their judgment is affected by the circumstances surrounding the imminent split.

That’s because, in Illinois, it matters little if a spouse is abusive. As a state that recognizes ‘no-fault’ divorce, even if an affair leads to the divorce, that doesn’t mean that the victimized spouse will get the lion’s share of marital assets.

The only thing that can change the court’s mind is financial fraud or misconduct. If a spouse pilfers money that should have gone to their family (by, say, getting gifts for a mistress), the courts will order the cheating spouse to reimburse those funds to their spouse.

What Is Marital Property?

To understand what marital property is, consider this example. Say a married couple gets an expensive piece of antique furniture. If they want to get a divorce, the court has to decide who receives that marital property – an item they acquired during their marriage.

However, any items they acquired outside of their marriage (before or after) will be considered non-marital property by the court. For instance, if the wife inherited a diamond necklace from her grandmother before she married legally, she can keep it since it is non-marital property.

Marital property can also be combined. Equitable distribution will be difficult in that case. For instance, if a spouse placed money he earned before he got married into a joint account with his spouse, it will still be considered marital property – unless the funding source can be proven and traced.

Factors That Determine Property Division During an Illinois Divorce

Your equity division lawyer in Schaumburg will tell you that Illinois courts consider several factors before distributing marital property equitably. Some of these include the following:

Short-term marriages are analyzed more closely than longer ones for a good reason. Illinois courts are quite serious in preventing gold diggers from marrying wealthy individuals so that they can get a large payout when they divorce them a few days later.

Illinois divorce judges believe that partners who have equal pay should get a fair split regarding marital assets. However, the homemaker can get a larger piece of the pie in a long-term marriage.

That’s because the earning spouse can continue to support himself after the divorce while the homeowner may not have the earning capacity to do so. Plus, how much the spouse can earn after divorce also affects the outcome.

When the time comes to divide property, courts in Illinois also consider the wellbeing of the children. In most cases, they try to ensure that the children remain in the same home so they can go to the same school. This is why in most divorce cases, one spouse is given the family home as their portion of the marital property.

You can save yourself from a massive loss by getting a pre or postnuptial agreement. These are contracts that lay out what happens to property in case of a divorce. Most couples sign these to ensure estates and businesses are not considered marital property in a divorce.

In some cases, one spouse may wish to protect the other from debts they incurred during their marriage. Still, some may try to protect a property they acquired in a previous marriage for the children of said marriage.

Most purchases acquired during a marriage are considered marital property, especially if they were bought with funds from both spouses. However, gifts and inheritances do not fall under this category.

The split can be quite complex, so you should consider hiring an experienced equity division lawyer in Schaumburg to figure it out.

In Illinois, non-marital property is defined as any property that is:

An attorney can help you determine what type of property you have, whether you acquired it before or during your marriage. The worst thing you can do is agree to a property split before you find out the true value of the assets you have. An experienced attorney will prevent you from taking that step and potentially ruining yourself.

Debt incurred before the marriage is not considered marital property in Illinois. Only debt incurred during the marriage can be split equitably between the spouses. This includes credit card debt, mortgage, etc. You can either divide the debt with your spouse or share the existing debt.

Retirement funds such as social security benefits and 401 (k) plans are also considered during equitable property division in Illinois. The division varies with the type of retirement fund you have:

Whether you wish to create a pre or postnuptial agreement, please do so before it is too late and make sure it is valid in court. Several issues can ruin their authenticity and make them invalid. If you are unsure about the agreement’s validity, get in touch with an experienced equity division lawyer in Schaumburg for help as soon as possible.

If you are searching for equity division lawyers in Schaumburg who are as dedicated as they are compassionate with their clients, contact the Law Office of Fedor Kozlov for a consultation today. We have a no-holds-barred approach to each divorce case that we deal with.

We aim to ensure our clients can get practical information and legal counsel which they can rely on, especially when property and other asset distribution come into the picture. Our trained and experienced attorneys leave no stone unturned to understand your goals. Rather than taking a cookie-cutter approach, we present a range of options along with their benefits and implications so you can make an informed decision.

We will set an individual consultation with you at a convenient time. Dial (847) 241-1299 to book one today. The first thing we will do is understand your goals, financial and personal before we create a strategy that can fulfill them.

We understand that navigating life after a divorce or separation can be difficult. Let us help you take the first steps into a new and fulfilling life by choosing us as your legal support. We will not only ensure your best interests are protected, but our attorneys will also make sure conflicts are resolved without hurting your future. So if you are ready to kick off the process, contact us and book a consultation as soon as possible. We will await your call.