Visitation and Custody if Your Spouse is in the Military 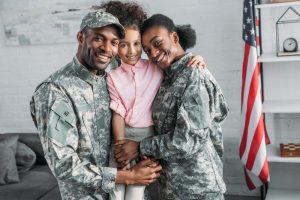 Military service can have a significant impact on child custody cases. Several service members have visitation and custody rights with children – even if the other parent is not their current spouse. However, absences and missed court dates can disrupt or undermine their rights due to their military duties, resulting in stress for both parents.

Certain factors may reduce a military member’s chances of gaining custody of their children – especially with a family care plan already in place. Most of those issues arise because of their need to relocate, which many military members do before they fulfill their service. Besides affecting custody arrangements, relocation can also impact legal help available to them.

According to the Uniform Deployed Parents Custody and Visitation Act, military members can have a fighting chance to regain and maintain custody. According to the Act, when it comes to determining child custody, the court cannot ignore a military parent’s deployments. Also, deployments cannot be considered as the sole reason for custody by the other (non-military) parent.

Additionally, it also prevents the child’s home state from changing, due to an existing parenting schedule, which places the child outside the military parent’s state.

If the custodial parent is in the armed forces and deployed/unavailable due to their service duties, no permanent provisions can be entered to change the existing custody arrangements. Overall, the aim is to provide a higher degree of fairness to military parents.

Importance of a Family Care Plan

Creating a family care plan in the best interest of the child is the ideal way for both parents in this situation. The plan should give the child financial and medical stability while away from their custodial home. This is important for military members since they can be deployed at any time without notice.

With a family care plan, the military parent can request joint custody of their child in case they are deployed outside the state the child lives in. The plan helps everyone understand how each party can adjust for relocation.

Whether you are a member of the military or not, if you need an experienced family attorney to determine child custody and visitation rights in Schaumburg, Illinois, get in touch with the Law Office Fedor Kozlov. We will work with you at every stage to obtain the best results for your case.