How Is Debt Division Handled In An Illinois Divorce? 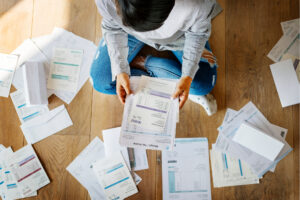 Dealing with debt is perhaps one of the most difficult aspects of a divorce. Disputes over who gets to keep the family home, who gets the savings accounts and cars can cause several difficult arguments during the asset division process. This is why most couples hire specific Schaumburg debt division attorneys to determine who gets what.

The entire process can be quite stressful, especially if debt created by one spouse is not divided with the other.

How Debts Are Divided In an Illinois Divorce Case

Illinois is an equitable division state, which means that debts are not divided 50/50 between divorcing couples. Before deciding which spouse is responsible for what and the amount they need to pay for post-divorce, the court considers certain factors. The court evaluates each party’s contributions to the debts and their financial state to come to a fair conclusion.

The court also takes each party’s likelihood in acquiring future assets into consideration as well and whether either of them used their marital income for no marital expenses. Expenses related to child care and the duration of the marriage are also considered in a debt division case.

In Illinois, Schaumburg debt division attorneys will tell you that debts are divided into marital and non-marital debt in a divorce. This means that a debt acquired by one party before they got married will remain their responsibility. However, a debt that both spouses incur during the marriage will be considered a mutual one to be split between them as per the court’s division. The latter is rarely a 50/50 split.

A couple can accumulate several debts during their marriage. Some of them include the following:

If you and your spouse have mortgages on properties that have yet to be paid off, they can affect marital asset and debt division during your divorce. If either one of you wishes to keep a house after it, they will probably have to pay its outstanding mortgage balance as well.

Credit card transactions from either party during the marriage could be included in the marital debt unless a spouse used the cards to dissipate marital assets. Schaumburg debt division attorneys say that couples who pay off most of their credit card debts fare better than those who don’t before a divorce is finalized.

A vehicle can be allocated to one of the spouses if they bought it before they got married or if they used non-marital assets to buy it. If the car was purchased with marital assets, on the other hand, and if both spouses are listed as co-borrowers in the loan contract, the vehicle will be considered part of the equitable distribution process.

Many couples in Illinois and across the US complete or continue their education during their marriage. In case they get divorced, any student loans they accrue may be considered non-marital debt.

However, suppose one party takes out a loan to continue their education to increase their earning potential. In that case, the new debt will be considered marital debt by the court.

Court Considerations for Debt Division in a Divorce Case

When distinguishing between marital and non-marital debts, marriage is not the only factor the court considers. In some cases, financial acquisitions post-marriage can also be considered non-marital. Some of the factors that can affect this decision include the following:

Marital debts can be negotiated so that both parties can count on equitable distribution. Certain compromises on the division are also possible, but those should be done through experienced Schaumburg debt division attorneys. Mediators can also ensure both spouses reach agreeable terms that are also acceptable in court.

Here are some frequently asked questions (and their answers) you may have regarding debt division in your divorce case:

Q. Can creditors come after me for my spouse’s debts?

A. Yes, creditors and credit card companies can pursue you to repay your spouse’s debts post-divorce. It sounds unfair, but they have the right to do so. Even if they were assigned to your ex in your divorce, joint debts would also be your responsibility.

In this case, the best way to take care of your debt is to sell as many assets as possible, such as your marital home. The aim should be to pay down debts as much as possible. If you cannot do that, consider hiring an experienced divorce lawyer who can handle financial issues and help you deal with marital debt.

Q. How do I allocate my student debt post-divorce?

Q. Why did my spouse lie about their financial assets on the disclosure forms?

Such deceptions can also take a toll on child support and spousal maintenance settlements. The former is based on a specific formula that considers the differences in income between the two spouses. A dishonest spouse may try to reduce those obligations by either disclosing inaccurate income or saying they have too much debt to take care of them.

Some spouses also lie about their finances out of spite. They may even destroy some assets to prevent their ex from getting them or using them to pay off their loans and debts. Whatever the reason may be, every spouse deserves settlements that are accurate and up-to-date so they can manage their lives and debts post-divorce as easily as they can.

How Can I Tell If My Spouse Is Trying To Fool Me About Their Finances?

Financial manipulation can take a significant toll on your quality of life post-divorce, especially if your spouse held the purse strings in your marriage. That means you were out of the loop regarding shared finances and debts. Why should you pay for the latter in full if you were clueless about them or were not involved in accruing them?

Take action before it is too late. Here are some signs that your spouse may be hiding or trying to lie about finances during your divorce case:

Your spouse has changed the passwords of your online bank account, hides financial documents, deleted important files, and reroutes mail to a different email address or physical address. They never give you a straight answer regarding marital finances or get agitated when you ask about them.

If your spouse asks you to sign documents urgently or before you can read and understand them, that is a red flag. Never sign anything without running it past your attorney first. You may unknowingly sign away funds or take on debts that are not your responsibility.

There is a sudden dip in business revenue or income

Financial struggles can be a symptom of financial deception in a divorce case. For instance, if your ex discloses a business that was thriving before is floundering during your case, they may just be trying to undervalue it, so you don’t get a fair settlement.

A spouse who starts to gift money to friends or family members or splurges on them by giving them cars may be trying to hide assets. Some may hide cash to hide assets from their spouses. If yours is withdrawing large amounts from their bank accounts during the divorce, chances are they are planning to hide it overseas, so they don’t have to split it with you.

Contact the Law Office of Fedor Kozlov for a Free Consultation

Your spouse may be trying to hide assets and making arrangements to ensure you get the lion’s share of the debts as we speak. The worst thing you can do right now is wait to get a Schaumburg debt division attorney of your own. At the Law Office of Fedor Kozlov, you can find experienced, dedicated and compassionate Schaumburg debt division attorneys who can ensure you do not get a raw deal.

At times like these, you need an attorney who can understand your struggles and can represent you aggressively if need be. Our legal team can set a solid foundation for you to start your post-divorce life. Get in touch with us for a free consultation by dialing (847) 241-1299.