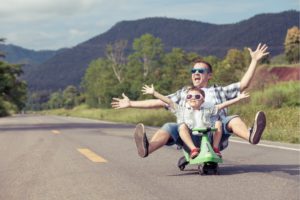 Mothers are considered to be one of the most important people in a child’s life. They look after their children and shower them with love and support. There is a unique bond between a mother and her child, which can be unparalleled to any other relationship.

However, it is important to recognize the significant role that a father plays in the life of his child. Studies suggest that those children having a father figure who supports and stays involved in their lives are more likely to succeed in life. Furthermore, it also facilitates their social development and language. Fathers also possess the quality to provide unconditional love and are just as capable as caregivers for their children.

Sometimes, marriages do not work out and the circumstances lead to divorce. Things are already complex and can get real ugly especially if the children are involved in a child custody battle. Among many important variables that come into the play, the most significant decision that needs to be made is the child custody and visitation rights. Thousands of couples reach out to the courts everywhere to resolve their conflicts regarding child custody.

In the past, it was very common for the judges to make a decision in favor of the mother as a primary caregiver. However, in recent times, the importance of fathers in the lives of their children and their rights and responsibilities have been acknowledged and are considered during the trial.

In Illinois, when the parents go to the court to determine child’s custody and visitation rights, the judge that oversees the case considers the best interests of the child as a guide for this important decision-making process. This means that consideration is given to the benefits of the child rather than wishes of the parents.

However, the determination of the best interest of a child can be a very complex and difficult process. The judge has to look at a number of factors while making this important decision, for instance:

These are only some of the factors that the judge uses to make a decision. Each case comes with a unique challenge and the judge must take all the circumstances into consideration before reaching a conclusion.

For further information about issues pertaining to child custody or to schedule a free consultation, contact Law Office of Fedor Kozlov at 847-241-1299 to speak with an experienced family lawyer on this topic.