Equitable Distribution In Divorce In Illinois 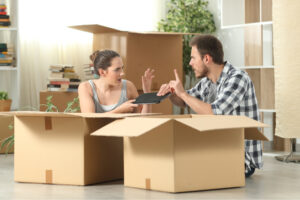 Equitable distribution in divorce, according to the Illinois divorce laws, involves dividing the marital assets that were acquired during the marriage. All states except California, Arizona, Nevada, Louisiana, Idaho, New Mexico, Wisconsin, and Washington follow the equal distribution principles.

The Illinois Marriage and Dissolution of Marriage Act require all marital property obtained during the course of the marriage should be divided between the partners.

To understand how the court determines the equitable distribution of property, you should understand the difference between marital and separate assets.

Marital assets are assets that have been acquired between the period when the partners were wedded and when they filed for a divorce. In other words, all properties after marriage till divorce are presumptively considered marital assets according to Illinois divorce laws.

A spouse who claims that a property is not marital property must provide a claim. For instance, a person who sold the house bought before marriage to invest in stocks must prove that the proceeds of the sales of the house acquired pre-marriage were invested in securities after marriage.

Factors Illinois Courts Consider in Division of Property in Divorce

The Illinois courts assess both the marital and separate properties of the divorced couples. However, only the marital property assets will be allocated to the divorced individuals. Various factors are considered to determine how the assets will be distributed among the partners after a divorce. Some of the factors that the court considers in the division of properties between divorced couples include:

Age, Health, and Employability of Each Partner

The court will consider objective factors such as the age of the partners. Moreover, the health of the partners is also assessed to ensure equitable distribution of assets. As an example, if one partner has poor health, the court may be inclined to favor the partner more in dividing the property.

In addition, the present and future earning capacity are assessed in the distribution of the assets.

Contribution of Each Partner

The contribution of the partners to the marriage will also be considered during divorce proceedings. If a partner was a homemaker, the value of the contribution will be assessed to ensure equitable distribution of assets.

Pre- or post-nuptial agreements between the partners are also considered during the division of marital property.

An important point to understand is that the prenuptial agreement must be valid. Certain factors can invalidate the agreement, such as the contract signed under duress or lack of understanding about the terms of the agreement.

Pension benefits that have been accrued during the marriage are considered in ensuring equitable distribution in Illinois. Funds that are contributed to the pension account when the partners are married are considered marital property. The 401k account is subject to division similar to other marital properties unless there is a prenuptial agreement between the partners.

Generally, the withdrawal of money in the retirement account before the age of 59 ½ is subject to a 10 percent penalty fee. But the fee is not imposed when the amount from the pension account is transferred to the spouse.

A court may penalize a partner if it is found that the partner had tried to dissipate the value of the marital property. A partner will be penalized whether the partner attempts to reduce the property value during marriage or after divorce.

Equitable Distribution is the Last Resort

The partners can come to an agreement by themselves or through their divorce attorneys. The court will intervene and use their direction only if the partners don’t reach an agreement regarding the distribution of properties.

You should note that equitable distribution laws apply only in court. Couples have a chance to work out how the property should be distributed on their own. They can get more from the marital property due to savings in costly court proceedings. Spouses are free to distribute the property anyway, which seems justifiable to them.

If the partners cannot agree on how to distribute the property, the court will use its discretion to decide the matter. The spouse may also agree to divide a portion of the marital property through negotiation and let the court decide how to divide the remaining amount.

Contact a professional divorce lawyer to know your options regarding the division of marital property.

The Law Office of Fedor Kozlov has been providing expert legal services for disputes regarding family law for years. Our divorce lawyers in Schaumburg, Illinois specialize in family law cases about domestic violence, divorce, spousal maintenance, equitable distribution, tax implications, and child support. We offer highly personalized and responsive legal services to all of our respected clients.