Are Both Parents Given Equal Consideration for Child Custody in Illinois? 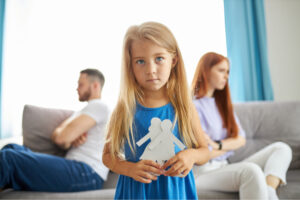 If you’ve recently started divorce proceedings in Illinois, you might be wondering whether both parents are given equal consideration for child custody or one parent is favored over another. As a loving parent, you may want to acquire full custody of your children. This is why, you might be interested in finding out that out of 12.9 million custodial parents in the US in 2018, four in five were mothers, according to the United States Census Bureau child custody statistics.

If you’re a father, don’t let the thought that custody automatically goes to the mother get your hopes down. With this misconception, many fathers don’t even try. We’ll take you through Illinois child custody laws, but for now, keep in mind that fathers are just as likely to attain child custody as mothers.

How the Custody Determination Process Works?

Before getting into how child custody is determined, it’s important to understand the two types of custody: Physical custody and legal custody.

This refers to whom a child actually lives day-to-day.

This type of custody gives a parent the right to make the most significant decisions about their child, such as their education, medical decisions, religious training, and so on.

Based on the children’s best interests, a court can award sole legal and/or physical custody to a single parent or a joint physical and/or legal custody to both parents. The custody determination process works as follows:

In the beginning, the divorced couple attempts to decide on custody on their own. Either parent can have their attorney represent them. If there’s an agreement, a joint parenting plan is prepared. It illustrates each parent’s physical and legal custody of the child. If the parents don’t agree on a custody arrangement, the issue is forwarded to a court-ordered Mediation.

Parents attend court-ordered mediation in the presence of a certified mediator, who can be a social worker, a therapist, a psychologist, or a third-party attorney. The mediator’s role is to help parents reach an agreement. If the mediation fails to solve the dispute, the case is left to the court to decide child custody.

Illinois courts rely on relevant statutes and laws, as well as case law, to determine child custody. As mentioned earlier, the decisions of the judge are made in the best interest of the concerned child. Under Illinois law, there are different criteria for awarding physical custody and legal custody, some of which are overlapping. Let’s take a look at them individually:

The court aims to decide which parent gets physical custody based on the child’s best interests, which is determined by the following factors:

The following are a few factors that the court uses to determine a child’s best interest concerning legal custody:

Based on the factors listed above, the judge may award joint custody to the parents or sole custody to a single parent. Let’s understand what each idea implies:

If parents seem to possess the ability to effectively cooperate in aspects directly impacting the child, joint custody may be awarded. This decision implies that both parents will have a say in making the major decisions concerning the child’s life. A Joint Parenting Agreement accompanies the decision that outlines the responsibilities and rights of each parent regarding the child as well as specifies where the child will be living. The document also explains how potential disputes related to parenting issues are to be resolved.

On the other hand, the court awards sole custody to a single parent when it’s established that the other parent is not fit to make decisions impacting the child or when the two parents can’t agree to joint custody. In this case, only one parent is granted the authority to decide major aspects of the child’s life. This, however, doesn’t mean that the other parent won’t be allowed to visit the child.

Similarly, joint custody doesn’t necessarily imply equal parenting time. A visitation schedule ordered by the court or agreed between the two parents will determine how much time each party has for parenting.

How to Improve Your Chances of Getting Better Child Custody?

It’s important to note that the laws concerning child custody in Illinois can be full of jargon, complex, and conflicting terms. That is why you should hire a reliable law firm that specializes in family law. For example, the Law Office of Fedor Kozlov has some of the most experienced child custody lawyers in Schaumburg. They’ll advise you on the steps you can take to achieve your desired outcome from a child custody dispute. We recommend avoiding the following behaviors and actions when involved in a child custody case because these will strongly work against your interests:

Not only should you avoid the above-stated behaviors, but also demonstrate a positive attitude with your child and even with the other parent, as much as you can. In addition, try to be more involved and have more knowledge about your child’s social activities, education, and other aspects compared to the other parent. More importantly, keep documenting your involvement in the child’s everyday life.

Besides, when the day of the trial comes, do everything possible to portray yourself in a positive light. Wear professional attire and be presentable during the trial. Keep your facial expressions neutral and stay calm when the opposing counsel is presenting evidence or witnesses are testifying to the judge. These can be provocative at times, especially because they relate to your beloved child.

Any amount of anger and frustration sensed by the judge can hurt your chances of getting the desired amount of custody. Thus, leverage all your effort to control your expressions, speech, and actions. When required, your attorney will object to the admission of evidence or the witness testimony. If, during the trial, you feel there’s something you need to tell your attorney, make a note of it.